What is the “Network of Baha'is of Jewish Background”?

This is a network of Baha'is of Jewish heritage trying to create a peaceful atmosphere of teaching the Baha'i Faith in the Holy Land. For decades now, Jews within the state of Israel have had their rights abused, while most Baha'is remaining silent to this day, and through this initiative we aim to change that.

Who is behind to support you in this initiative?

Every right-minded Baha'i is our supporter and Baha'i Teachings are our best supporter.

Baha'is believe that “Ye are all fruits of one tree, the leaves of one branch, the flowers of one garden.” Therefore we do not approve the ban of not teaching the Baha'i Faith to the Israeli citizens. In the beginning we had many prominent Baha'is coming from the Jewish background but now we do not see this trend anymore. The reason being the wrong decision of the Administrative Order prohibiting any teaching activity in the State of Israel.

When asked, the administration claims that “it was Baha'u'llah who imposed the ban”! This is not true because Baha'u'llah ascended to the Abha Kingdom in 1892 and the State of Israel came into existence in 1948. How this is possible? We, therefore, took it upon ourselves, this most important responsibility of teaching the Faith to our Jewish brethren in Israel.

Why did you set up this network?

Religious freedom is not a privilege, it’s an inalienable right of all members of the human family. We choose to fight for it by addressing the often ignored and under-represented issue of Baha'i religious freedom in the State of Israel.

You are most concerned about the Jews of Israel?

The writings of Baha'u'llah are based on equality of all the men and women hence the people of Israel are not any exception. They should not be discriminated, based on nationality, they should get the privilege of knowing the Baha'i Teachings, the 12 Principles the Faith. The 4 Core Activities should start in Israel, specially, the Ruhi Curriculum founded by our former House of Justice member, Mr. Farzam Arbab.

Owing to the support and respect which the Israeli government offers to the Baha'is worldwide, the Baha'is are exempted from the security checks at the Airport. They are respected a lot by the Israeli authorities. It is a well-known fact that every President of Israel has visited the world centre. They offer every help and go out of the way to help the Baha'i administration. Then why the Baha'is should discriminate the people of Israel?

The Baha'i World Centre and Israeli Government have a number of agreements of co-operation and co-ordination resulting in the expansion of the Baha'i Faith.

The Baha'i Faith inspires us to fight for individual freedom regardless of any religion, race or country. We believe in tolerance, respect, unity, and understanding. We are bound to respect our Government and we cannot disobey them.

Are there any Baha’is writing with you?

This blog is set up by an independent Baha'i youth who believes that the Divine Teachings cannot be the monopoly of a few. We are above Nationalities. We have free and fair elections for our Institutions. Out of the 9 members of the Universal House of Justice four are Persians, although Baha'is are persecuted in Iran. This shows that every Baha'i is treated as equal, then why the People of Israel should be excluded?

Do you think this will work?

This is just the beginning. Our dreams go way beyond this blog. We took this first step and hope to take 10 more steps each day until our simple demands are met. More and more people are appreciating our efforts as they come to know about the injustice being done to the people of Israel. Some members of the House support us in this endeavor. We have their backing. The day is not far when we will be witnessing full-scale teaching projects in Israel. We will have the LSAs in each and every locality and the Baha'is of Israel will be proudly able to elect their own NSA. International Baha'i Convention will also be attended by the Israeli Baha'i delegates. The NSA of the Baha'is of Israel will also be given the targets by the ITC. We already have the counselors, the ABMs etc. to help with the plans. We already have establish funds and Huquq'ullah committees, where the Baha'is are giving generous contributions.
Posted by Yohanna at 5:33 AM No comments:

VIdeo : Dr. Mark converts to the Baha'i Faith in 2 days!

Posted by Yohanna at 7:34 AM No comments:

More than 16000 Israelis receive the "healing message" of Baha'u'llah in just 2 days.

Posted by Yohanna at 8:30 AM No comments:

President of Israel visits the World Centre to honor "the Bab", receives the "healing message" of Baha'u'llah!

On Sunday, President of Israel Reuven Rivlin came to Haifa to honor the 200th anniversary of the birth of the Bab.

The visit follows a recent reception for local leaders and a special two-evening opening of the Shrine of the Bab and the terraces on Mt. Carmel, which saw more than 16,000 visitors walk through the Baha’i gardens, with many entering the Shrine, in a stirring display of joy, reverence, and social harmony. A brief film about the Bab was shown at the bicentenary reception.
Posted by Yohanna at 8:21 AM No comments:

Dr. David Rutstein is a Baha'i of Jewish background 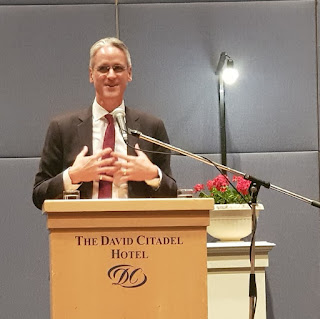 Last week the outgoing Baha’i Secretary-General, Dr. Joshua Lincoln, took leave of his many friends, colleagues, and co-religionists in Israel and welcomed the new incoming protégé, Dr. David Rutstein, at a sparkling reception at Jerusalem’s lovely David Citadel Hotel. The guests included what appeared to be the crème de la crème of Israel’s religious, cultural, political and business society. Mingling with the guests were several volunteers from the world Baha’i centers in Haifa and Acre, who chatted with the visitors, explaining the faith and answering questions of the curious. The delicious buffet dinner, accompanied by a range of colorful fruit drinks, was the background for a friendly “shalom” to the two gentlemen. A musical interlude added to the pleasure, while brief welcome and farewell speeches rounded out the reception.
http://www.diplomacy.co.il/frontpage/4308-celebrating-baha-i-engagements-in-jerusalem

Dr. David Rutstein, MD, MPH
Founder, and President of the SolHEALTH Board of Directors. As a senior health executive, public health expert and clinician, he has created and led innovative clinical, administrative, management, emergency response and executive level teams and organizations during a 35 year career. Prior to founding SolHEALTH, Dr. Rutstein was the Vice President for Medical Affairs for United Family Healthcare in China. A retired United States Public Health Service Rear Admiral, he served as the Deputy Surgeon General of the United States until 2011.
Posted by Yohanna at 5:34 AM No comments:

Udo Schaefer was a Baha'i of Jewish heritage. 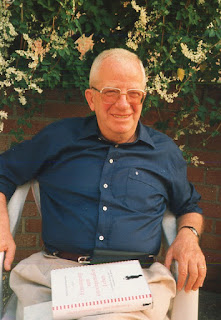 Udo Schaefer (born October 19, 1926 in Heidelberg , Germany) was a lawyer and one of the most important contemporary theologians of the Baha'i Faith. Schaefer came from a family of musicians. In 1948 he converted to the Baha'i Faith.

http://www.udoschaefer.com
Posted by Yohanna at 1:49 AM No comments:

Farzam Ehsani is a Baha'i of Jewish background. 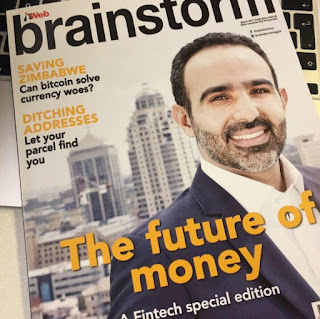 As it turns out Ehsani is of Persian origin and born in my adopted city … in Los Angeles where we may beat out Tehran for number of Iranians. Farzam Ehsani’s (“FA”) resume reads as total establishment: he attended the University of California system’s best school, UC Berkeley and his profession credentials are include consulting stints at Deloitte Consulting and McKinsey & Co. before becoming a corporate officer at Johannesburg’s Rand Merchant Bank.

If you imagined FA as a soulless, corporate android, you would be wrong. From one of the most financially money-crazed years,1999, in one of the most money-crazed places, San Francisco, CA, FA’s first stop was at the Baha’i world center in Haifa, Israel. At the Baha’i center he worked as a gardener planting seedlings and extracting earth worms. During college years at Berkeley FA wrote speeches during a summer internship in the country of his upbringing, Kenya, for Klaus Topfer, a German Federal Minister and, at the time, Executive Director of the United Nations Environment Programme.

https://bitcoininvestors.com/td_d_slug_38/
Posted by Yohanna at 10:14 AM No comments:

Aghdas Javid is a Baha'i of Jewish Background

When Aghdas Javid arrived in Canada with her physician husband, Mirza, in 1966, there were few other Iranian immigrants around. She was determined to integrate her family and contribute to her new community. It wasn’t easy – her English was accented, her skin was darker, her Baha’i religion barely known in Canada. But almost immediately she started classes for children and young mothers, taught Persian cooking and was invited to speak to local organizations. She began inviting people to her home for a Baha’i fireside, a weekly tradition that continued uninterrupted for more than 50 years.

During her childhood, Aghdas was encouraged to study and learned English. Her father also instilled in her a lifelong love of gardening. In Canada, she tended her flowers while elegantly wearing an emerald green ring, often giving a rose to a departing visitor, so that no one would leave her home empty-handed. Her home was known for delicious Persian food embellished with her homegrown herbs.

In Iran, Aghdas had taught village women to read and she continued to lead creative ideas for the promotion of women and children’s education in her Canadian community. In 1990 she was awarded Hamilton’s World Citizenship Award for community service with the UN Association and for helping to establish the Children’s International Learning Centre. She took on every project with passion and an unwillingness to take no for an answer. Sometimes when she was leading a project, Aghdas would ask one person to take on a task and then ask two others to do the same thing to ensure it got done. She had little patience for mediocrity.

Aghdas was also hard to say no to when she invited you to her Baha’i fireside talks on subjects ranging from the nature of the soul to social justice and community development. She always insisted on having a good speaker who allowed for questions and conversation. If the speaker was not inspiring enough, the tea and sweets were brought out early. Every July she hosted a garden party for all who shared that birthday month and in late February there was an annual community tea party to celebrate the Baha’i holiday of hospitality and fellowship.

Aghdas knew she was fortunate to have left Iran before the 1979 revolution, which had led to the deaths of many of her friends. Her contacts with Canadian journalists and politicians were instrumental in the Canadian government’s resolutions to the continuing persecution of Baha’is in Iran. Aghdas said that being in Canada, she felt “freed from a cage.” In 2001, she was one of 19 Canadian representatives to travel to Haifa, Israel, for the opening of the Baha’i Garden Terraces on Mount Carmel.

Aghdas and Mirza raised three daughters, Sussan, Ladan and Jasmine, and she was widowed in 1999. As Aghdas developed physical frailties she would sometimes complain that “being old sucks!”, but her spirit was undiminished. She joined a local aqua-fit class, lived independently and insisted on driving her own car until her final illness. Mama Aghdas took joy in her five grandchildren and great-grandson and would give them wet kisses in the pool. A new great-granddaughter bears her name. Her legacy remains in the many lives she touched with her enthusiastic energy and indefatigable spirit.

https://www.theglobeandmail.com/life/article-aghdas-javid-was-known-for-her-bahai-fireside-talks-and-persian/
Posted by Yohanna at 11:41 AM No comments:

https://www.youtube.com/watch?v=H5WF3iixggY
Posted by Yohanna at 9:51 AM No comments:

Beloved Guardian has forecasted the “Rise of House of Worship in the Holy Land.”

This is the place where Israeli Baha'i Temple is going to be constructed sooner. Baha'is very well know that whatever Shog... 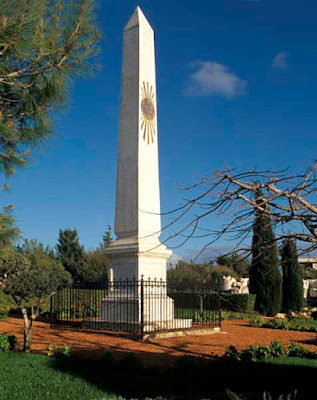 Baha'is should serve the people of the Holy Land by teaching Baha'i faith?

Yohanna
I love Baha'i faith and wish to teach it in every corner of the world including Israel.